First the end of the university’s academic year, then the run-up to the convention meant that I couldn’t find the time  to play in the cosplaymom sandbox.

But now, here we are at the Arkansas Anime Festival (A2F)  for the costume competition, to run some panels and for general fun, merriment and binging on pocky.

I had a cosplay parenting panel, and cosplay daughter participated in a Pan-Disney panel  that included a diverse array of characters, from Belle to Peter Pan to Hiro and Tadashi.  It was a great opportunity for a Hamada “family reunion”

Cosplay daughter, had coplayed Hiro Hamada before as “casual Hiro”

That’s the previous A2F. Now, however, after 6 months of construction, painting, hot glue burns and exacto knife cuts, cosplay daughter was ready to show off the Hiro supersuit…. 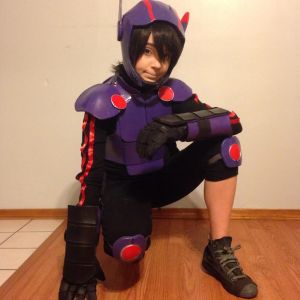 I’m very proud of this look- she made this entirely herself from scratch, with no help from me.  She used EVA foam mats from Lowe’s (the kind you use to put on the floor of a play area or work area), the heat gun that novio gave her for Christmas, and at least three different kinds of adhesive/glue.

(This is where I still have value. In the shopping. As bankroll…)

I loved how proud she was of it, and enjoyed how many small people wanted their photo with her this weekend.  The young ‘uns knew EXACTLY who she was and truly appreciated it!)

But I also love this cosplay because it let me participate. As HIro’s Aunt Cass;

It was PERFECT because I could be effervescently enthusiastic, and she didn’t have to fake her exasperation! 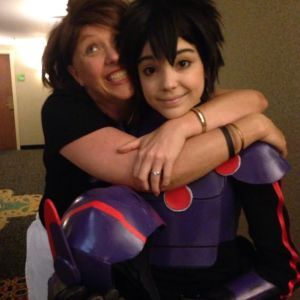 and then as a bonus,  at cosplay daughter’s Disney panel, the rest of the family was there…

Cosplay daughter won the Judge’s Choice award, I got to play with worbla in the cosplay-playroom and I met some great other cosplay parents/uncles/grandparents….as well as Obi-Wan Obama (more about that in another post.)

One summer convention down! Now on to Cosplacon in June!