So as I wonder “what on earth have I done” in taking on two simultaneous book contracts in my day job, the cosplay life around here goes on. Cosplay daughter has started a costuming internship, we have two upcoming conventions, and once again, the arts and crafts room has exploded. Stern words have been shared about limiting the flotsam to that room.

In and around this frenzy, I have recently learned about “OC shaming” and have come to realize that, once again, I am not nearly cool enough for the fandoms.

An “OC” is an original character, one that fans conceive of and develop through their love of the source material.  This is often found fan fiction- I believe that the deeply troubling Fifty Shades of Grey characters are OCs of the Twilight series.

I learned this lesson, because cosplay daughter and cosplay best friend are huge fans of the show Red vs. Blue:

a production of the company “Rooster Teeth”, hence the logo.

The show is a send-up of first person shooter games like Halo or Mass Effect and is relentlessly silly. Also, from my outside perspective, impossible to follow. But I’m not a gamer. Or 16 years old.

The girls are such fans, that they have developed, and enjoy sharing with each other, two original characters in that universe. These characters have names, elaborate backstories and their own plot lines.

As I heard about a new story that the girls were spinning for their characters, I was impressed at the detail and creativity, and suggested that they share it with the world as fan fiction. (So proud of myself for knowing what fan fiction is!)

However, what I didn’t know was that original characters are so disdained in the fandoms, that there is a whole world of making fun of both the characters and the people who invent them: OC shaming.  Cosplay daughter explained it to me this way:

-“Oh….your character is BEST FRIENDS with (insert name of famous character from the canon)…..Riiiigggghhhhtttt.”

This is so pervasive that on Tumblr (where the fandoms seem to live) the artists themselves have started a “OC shaming” tag that is similar to the dog or cat shaming:

An example from the Tumblr page of artist and cosplayer sawsbuckgo

I’m not sure what I think about this.

Generally, I have found the cosplay, art and fandom communities to be welcoming and supportive of difference and creativity.

So why would those same communities enforce strict adherence to “canons” and both shame and promote self-shaming of the fans?  What’s wrong with people taking some ownership of the universe(s) that they love?

I’m not sure. I suspect that part of it is that same fervent love of the canonical text/image/storyline.  Fans can be deeply protective of what they love so much.  And in the extreme, these are the same people who will tell others that they can’t cosplay a character of a different ethnicity, body shape or gender.  Those fans only want to see, in person, the same thing that they see on the page or screen.

I can remember feeling like that as a young fan.  I really, really loved Star Wars. And I really, really didn’t like the novels written about it.  It took the characters places that I hadn’t imagined them going or thinking things that I didn’t want them to think. I still don’t like Star Wars, Star Trek or Torchwood novels.

sorry. Not the best photo, but trust me. They were SO FUN.

But I did LOVE the gender-bent Hans and Leia at Cosplacon this year.

I think some of it has to do with the shared social imaginary. (Apologies here for geeking out PhD-style)

According to philosophers and other scholars, communities collectively construct a shared “imaginary”- an imagined set of values, laws, symbols and practices.  Members of the community then abide by and work within the space of those imagined parameters to function as citizens.

In the United States, one could argue, part of our social imaginary is the deeply held value of the right to free expression. And we (as a group) get very angry, defensive and accusatory of members of our community who challenge that value. (Hence the recent backlash against “political correctness.”

I wonder, if similarly, creating a new character violates the shared imaginary in a way that crossplay or creative versions of canonical characters doesn’t.  For example, do the fandoms accept Steampunk Darth Vader because he is a version of a part of our social imaginary already?

Not the one I saw at cosplacon, but impressive.

And then do we refuse to accept brand-new additions because we didn’t arrive at them collectively?

What I know is that most of my characters when I cosplay are OCs.  I have a steampunk pirate/smuggler who I based on members of my own family history, and an elf from the Tolkein Simarillion whose name I can never remember at conventions. (I admit. I picked a cool elf name from the text, because she loved trees. I love trees too).

For the record: Melian.

And I enjoy cosplaying both, and probably get away with it because I’m not encroaching on anyone’s beloved canon.

But I suspect that if I tried to insert my original character into a beloved fandom, say……Firefly 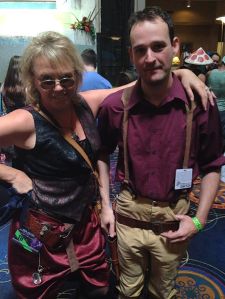 My smuggler, Amelia Elizabeth Hawkhurst Avery, and Captain Mal. I was excited. Amelia and I are both Browncoats.

That’s where I’d start to get shamed.

So as much as Amelia Elizabeth loved meeting Cap, I’ll keep them separate for now.

and continue being thankful for my daughter’s guidance into the world of the pop culture imaginary.