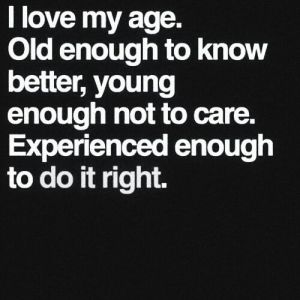 So does my best, oldest and dearest friend. We’ve been tight since 1981.  We agreed that we should do SOMETHING awesome in honor of our big birthday year. Not something appropriate, really, just something ridiculous and badass. 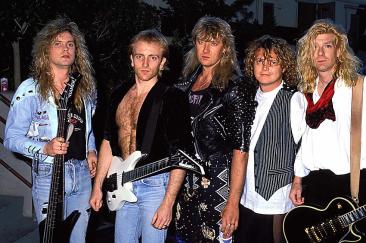 Chess and I saw Def Leppard in…1987? The Hysteria tour, so what better way to celebrate our birthday year than to see them again?

We booked a nice hotel, planned a spa day, and purchased MUCH better tickets than we could have afforded in 1987. Such are the benefits of being middle-aged with a steady income.

Now, Kiogenic (aka cosplay daughter), has recently discovered the joy of 1980s rock. (Another post incoming eventually about her badass Motley Crue cosplay). She wanted to come too- and why not? Clearly, though, we would need appropriate attire.

What’s the point of doing something slightly ridiculous for your birthday if you wear boring clothes? (Ok, many people would, and did, wear appropriate and even classy outfits to the concert. Chess did. But she’s not a COSPLAY MOM.)  I decided that I would make……..the jacket from Desperately Seeking Susan. 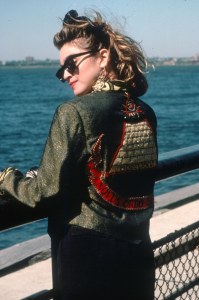 Haven’t seen it? As of Sept 2019, it was on Amazon Prime. Recommended! Super fun, circa 1985. And the jacket is both amazing, and a key plot point!  The costumers made at least two of these, (see photo below) one for Madonna and one for Rosanna Arquette. The one worn by Madonna in the film – and in her video for “Get Into the Groove,” sold at auction in 2016 for $70,000. (!)

Anyway, here I go. I do NOT have the sewing skills to try and tailor a jacket from the ground up, especially with the time constraints (and fighting terrible migraines- a joyful benefit of approaching menopause). It was a really rough summer, but I was DETERMINED to make this jacket.

I decided to the thrift shop and upcycle. (Thrift shops. Where would cosplayers be without thrift shops?- we sometimes say that the Macklemore song “Thrift Shop” is the cosplay anthem). I was also lucky that Kiogenic has moved back home, and was available for consultation and advice regularly! (Since going off to college in art and costuming, she has much better, and wider skills than I).

Step 1: Find a jacket that has the right general profile, and FITS.

In the first store I go to, I strike gold: the PERFECT jacket. I have wide shoulders, so finding a jacket that fits across the shoulders is hard. This fits, and while it’s not exactly the right color, that’s why we have RIT dye!

Step 2: Tone that green down a bit and hack away

The canonical jacket is not only more olive but had gold flecks. Kiogenic was pretty sure she could get the gold effect with an airbrush, and time, but time was short. I cut off the collar and the flaps for the pockets (this gave me fabric scraps for testing the concentration and timing of the dye). I also needed to cut and hem the bottom for the tuxedo points in front and back.

This left me with a good base for adding all of the fancy extras that make the jacket amazing.

Step 3: The collar and cuffs

The auction site actually has the best and most details reference photos. Kiogenic also watched the film (she hadn’t seen it) to get a good look at the details. The collar and cuffs seem to be a brocade lining that doesn’t line the whole jacket, just as a strip along the tuxedo collar and cuffs. It’s got texture in swirls and arabesques. This fabric was going to be impossible to find exactly

Looking around the internet (I’m not the only one out there desperately seeking to make the jacket), I see that many other folks cheat, or make do with tiger stripes. Here’s an example that someone else made:

Credit to “Q is for Quilter”: she made this for her daughter.

Props to her for the gold in the weave on the fabric (and the fact that she made the jacket from the ground up!), but I wasn’t loving the tiger stripe look. I spent probably entirely too long looking at brocade to buy online. I found some, which had the right gold base and similar patterning, but would need some amendment ($8 on EBay). Kiogenic suggested fabric paint- and NOT a fabric marker. I painted with a brush.

I used newspaper to pattern the right shapes for the cuff and collar pieces, cut them out of the brocade and got to work. The silver needed to be covered in black. 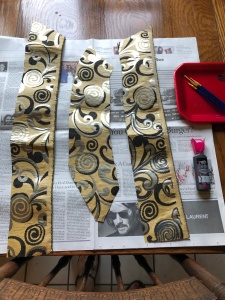 This would get me very close to the original, and closer than a tiger stripe pattern. Once these pieces were done, I fired up Peggy (my trusty 1960’s vintage machine) and sewed the pieces on. That got me to here:

Step 4: The iconic pyramid on the back

Ok, so now the fun begins. time to take on the image on the back- which is the pyramid, eye, and slogan from the back of a dollar bill- only in 1980’s gold lame and embroidery. On inspection, I see that the pyramid and eye are outlined in red. I decided to applique the lame on the red for stability and to get that outline.

YIKES. Lame is a pain in the ass! It frays like a mofo. Ok, now using glue.

Once the lame was glued on, I dug out my embroidery skills, learned, oh, 40 years ago from my mother, and hand-embroidered the details. (Thanks mom!) 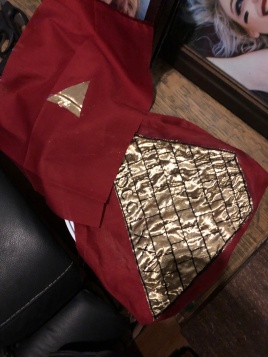 I cut the pieces out and then, again, glued them to the jacket.

Gluing these pieces to the jacket wasn’t laziness- Since I wasn’t building it from scratch, if I had sewed these on, I would have had to sew through the lining, and that would have made it hang funny.

Here we are before I add the extra embroidery details:

And now the ribbon. I am TERRIBLE at hand lettering. Thank goodness that Kiogenic is AMAZING at it. She lettered the slogan on the ribbon and I attached that. Now we are T-20 hours before the plane leaves for Las Vegas. I thought I was going to sew sequins around the ribbon, but Kiogenic swears that it’s a brocade trim. Crap. So I try to bust out an embroidery outline.

This is one of the two things I’m NOT happy about with this jacket. Before I wear it again, I’m going to pick it out and go with the sequin idea. 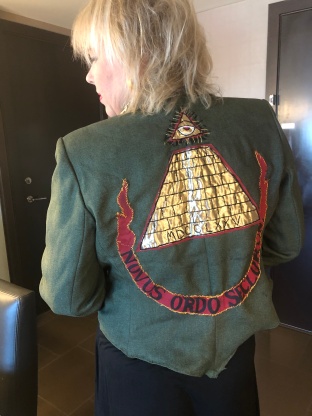 I need to redo the outline of the ribbon and add some interfacing at the tip on the back, but really? In and amongst the health issues I’ve had? I’m pretty happy.

For the record, Kiogenic basically cosplayed Blondie / Debbie Harry for the concert: 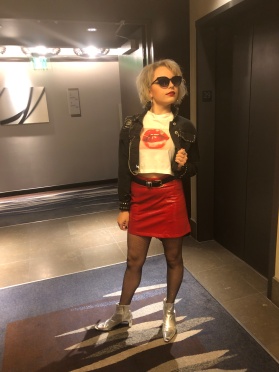 As always, significantly cooler than I am. : )

We, all three of us, had a GREAT time.  And I WILL wear this jacket again! 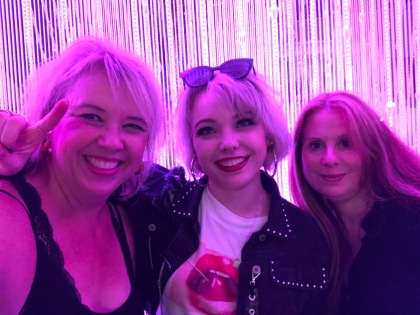