I was lucky enough to go to La Mole Comic Con in Mexico City again last week.  It’s Mexico’s biggest fandom event and to me, at least, it looked bigger than ever. It was packed. 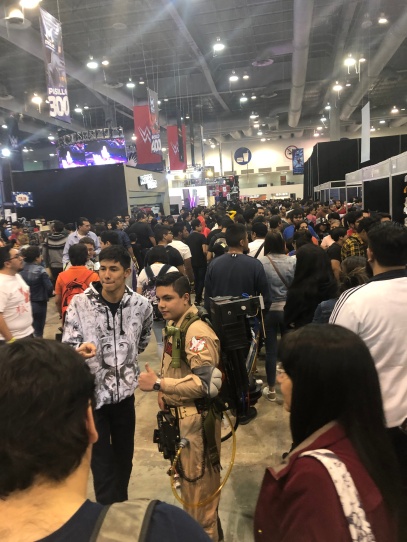 There were times when we could all barely move for the crowd of fans thronging the Centro de Convenciones Citibanamex.  Which was GREAT!

The center was also filled with cosplayers, rocking amazing looks, from superheroes to zombies. (Even the chihuahuas were in cosplay): 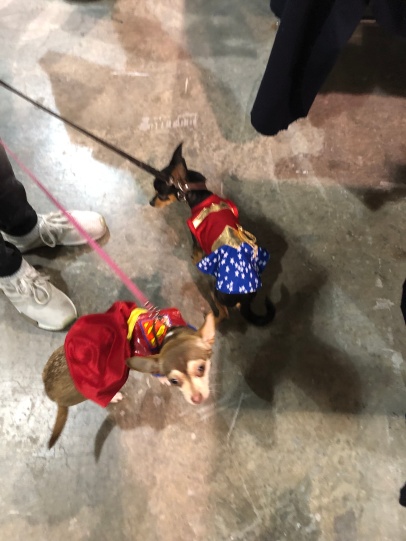 (I sat next to this perfect couple for the cosplay competition) 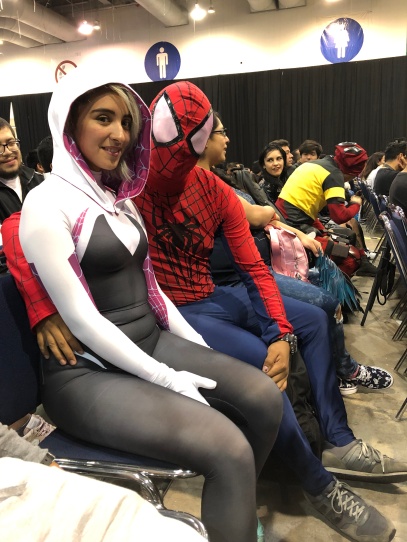 Spiderman and the recent movie Into the Spider-Verse have done a great job of promoting how “anyone can be behind the mask.” \

Spiderman (and the spider-verse) are a fan and superhero identity that encourage wide participation.

But Captain America? He’s so…….AMERICAN (and here I mean specifically U.S. of American).  As the official Marvel site says: “World War II hero Steve Rogers fights for American ideals as one of the world’s mightiest heroes.” Cap’s whole uniform and supersuit is an American Flag motif and his original incarnation even wore a capital “A” on his head.

I’ll be honest, given the treatment of Mexico, Mexicans and Latin Americans in general by the current presidential administration of the U.S.

-(not sure what I’m talking about?, check this out)-

I would have thought that Mexican fans would be frankly a lot more mad at the United States, and mad enough to not want to wear our colors.

Recent polling by Mexican firms indicates that for the first time ever, a majority of Mexicans hold negative views of the United States:

And I don’t blame them. My day job as a professor of Spanish and Latin American Studies has given me a front-row seat to the deterioration of U.S-Mexico relations. I cringe daily at the bile, hate and outright lies that come from our Republican elected officials about Mexico, I cry for the children separated at the border from their parents, and I rage against the stupidity and idiocy of the idea of a wall. Frankly, the last two years have been a struggle for me against depression and fatalism.

I’m ashamed of the U.S. policy toward Mexico and Mexicans. So I wanted to understand why Captain America was still so popular. So I asked, and these two cosplayers were nice enough to talk about it with me: 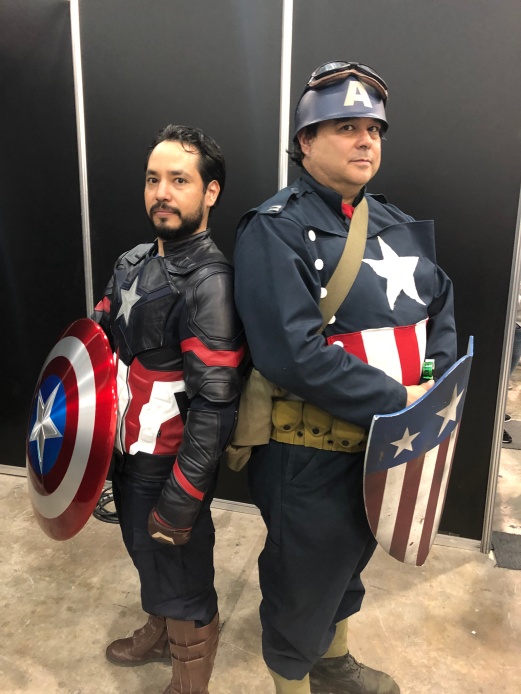 So I’m ashamed to admit that I didn’t get the Cap on the left’s name (hit me up if you see this!) but the WWII vintage Cap on the right is Captain Pete Solo. The former, a citizen of Mexico and the latter, a Chicano cosplayer from San Antonio, Texas.

What these two guys had to say made a lot of sense to me, and gave me hope in general. I asked them why, when they agree that our current president Trump is a nightmare (Pete used a much stronger word), why they would choose Captain America.

Their answer? Because Trump and the GOP don’t represent the America they admire. Steve Rogers does.

Both cosplayers, U.S. and Mexican, said that they had loved Rogers and Captain America since they were children. They admire Steve Rogers as the “Classic Good Guy/Boy Scout”- an example of American values of justice, fairness, and honor.

For these Captain America cosplayers, the superhero is an example of traditional U.S. values, those that we could all feel good about. This, of course, is how Marvel also describes Captain America.

Cap represents an America that hadn’t yet gone to the dark side (as Dick Cheney famously announced that we had to do after 9/11). Captain America is symbolic of the U.S. as the good guy: a nation that doesn’t torture- an America that protects innocents instead of locking them in cages.

(Cap’s main weapon is a shield- inherently protective and sheltering, as I would like strong men to be. His is not a toxically masculine figure, but a good man, a paragon of positive masculinity. He is a knight- ready to defend others. For a perceptive discussion on this, I recommend this piece).

Steve Rogers, like the Statue of Liberty, is a symbol of truth and justice, and as such, represents the America that we were, and can be again.

The fact that Mexican and Mexican-American cosplayers can still see that America is a blessing.

That they are willing to still embrace us through those core values that have been so trampled of late is generous, and I hope, perceptive.

The Captain America cosplayers of La Mole gave me hope: hope that we can return to the values that I grew up with as a child. Hope that we can move away from the anger and hatred of so much of the current environment.

Because the America of truth and justice is still here. Good men and women exist and are fighting to protect the weak and take care of others. As Captain Pete told me, Chris Evans, who plays the current film incarnation of Captain America, is a good example. His public discourse and positions oppose anti-immigrant and racist policies. He is, as a public figure, fighting just like his on-screen character. 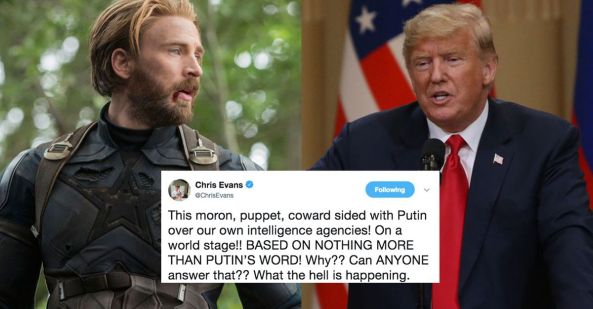 One example. I recommend him on Twitter, where is profile photo, incidentally, is of him visiting troops deployed abroad.

We need to emulate both of them- superhero and actor. Captain Pete told me that one of the things he likes about Cap is his “Never Say Die-Never Give Up” attitude. I think we need to remember that and act in the same way.

We may not have vibranium shields like Cap, but we can prevail. 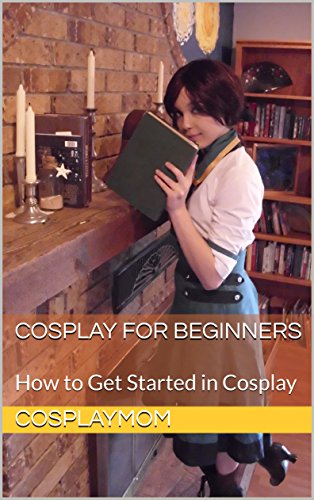