Cosplay daughter, cosplay BF, novio and I are in St. Louis, Missouri for Kawa Kon: a convention with an impressive array of Scout Legion Members, Master Chiefs dressed as Master Chefs and multiple Boba Fetts. (Or would it be Bobas Fett?)

There’s also an amazing group of Nazgûl, complete with a Sauron wearing his crown.

This is not the best photo of the group, but they wouldn’t stand STILL. Novio, bless him, shot it out the hotel window.

Watching a photo shoot of these Ring Wraiths (above), Novio was disturbed to see folks glomping them. “Nazgûl don’t get hugs!” he said, with an air of one who REALLY read the Tolkien books.

(This is a key reason why we keep him around.  He may eschew most outward participation in the fandoms, but he’s a good, old-school nerd like us).

Moments like the hugging of the Nazgûl remind me why I love conventions. Spontaneous expressions of affection and approval from others abound.  This is the tribe. The nerd tribe, and they are a welcoming bunch. 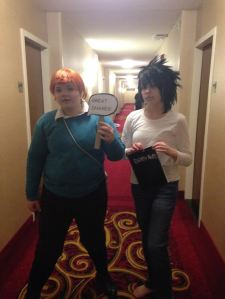 They hadn’t gotten five steps on to the convention floor before they were greeted with YES! YES! YES!

(that’s all. No content to the message, except generalized enthusiastic approval and immediate positive attention from other convention goers)

I would love it if, in my life or hobbies, strangers would leap to express such affirmation and joy.  And I would like very much to have the lack of self-consciousness to do that for others.

This all reminds me once again of the great speech that Star Trek alum Wil Wheaton gave some years ago at a convention: about “Why It’s Awesome to Be a Nerd.” In it, he is responding to a Mom’s question on behalf of her infant daughter about why it’s ok for Mom or her to show that enthusiasm.

In the speech, Wheaton says that “the defining characteristic of us (nerds) is that we love things….we all love different things. But we love them so much that we travel thousands of miles, we come from all over the world so we can be around the people who love the things we love. That’s what’s awesome about being a nerd.”

He tells the baby for posterity to “find the things you love and love them as much as you can.”

It might be cool to be disdainful and cold. To dismiss and disparage and not grab on to anything. But that’s not what I want for cosplay daughter.

I want her to love the things she loves as much as she can.

Even if that thing is creepy fantastical ghouls like Nazgûl.

2 comments on “Nazgûl Do Get Hugs: Why It’s Ok to be a Member of the Nerd Tribe”