I’ve recently made a fellow cosplay Mom friend whose sons (like my daughter) precipitated her entry into the milieu.

Like me, she is busy making armor and props for her boys, but also like me she chokes on what to cosplay herself.

It’s hard to be a middle-aged lady in a teen-dominated hobby.  Ok, maybe not HARD, but it can certainly make you self conscious.

That’s definitely more me on the right.

Part of what can drive the self-consiousness can be the convention you’re attending. Before we began this adventure, I had no idea that different conventions could have such widely varied constituencies.

The first we ever attended, Gl!tchcon was a nice mix of the older and younger crowd- 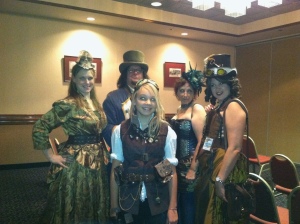 At that convention, I remember being impressed by the age spread: from very small anime cosplayers to the elderly lady dressed in the immaculate Imperial Star Wars Uniform.  I felt the same way at Cosplacon-  (A convention where I had a wonderfully fun conversation with an Aliens cosplayer my age with a PERFECT pulse rifle and where cosplay daughter landed in their banner art on the site.)

At those two conventions, I didn’t feel out of place at all and made some friends with whom I still correspond.

Other conventions, though, are different. We tried Visioncon in Branson, which was nice and well-run, but almost exclusively folks my age. There was a whole floor in the hotel which was 21+ (checking IDs off the elevator) and practically no one was in cosplay except the few youth.  That was ok for me, but deadly and boring for cosplay daughter.

The opposite end of the spectrum is A2F: a nearly exclusively under-25 group of happy, energetic teenagers who almost all show up in some amount of costume.  Cosplay is a young person’s game, and A2F is where I really felt out of place.

I had made a new cosplay for the last A2F (and worked hard on it- so much BEADING), and I fully intended to participate in the cosplay competition. But I felt so old, and so out of place, that I have very few photos even of the new elf outfit:

Cosplay daughter as Hiro Hamada and my newer Melian cosplay.

Because even though elves are immortal- (Galadriel is approximately 600 years old when she leaves middle earth), she doesn’t LOOK 600.

And no. Neither do I. 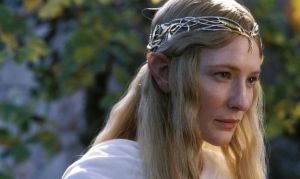 However, I don’t have her hair and make-up team either.

I realize that I probably need to re-evaulate.  I fully support and encourage cosplay daughter to cosplay any character she wants: male, female, old, young, human, non-human, etc.  So what’s my hang-up about age?

I have never had a negative comment from any con-goer of any age, and indeed, at A2F, I had many excitable young people squeal about “how pretty!” the outfit was and take my picture.

So maybe I need to get over it. Be less self-conscious and more conscious of life around me. Have fun, mix with the happy, happy youth and embrace the joy of the “play” part of cosplay.

Sarah and I can cosplay whoever we want.

I think we should.