NOTE: as you might imagine a post titled “problematic genitalia” would, this post contains a whole bunch of correct terms and euphemisms for the male and female reproductive organs.  It’s also full of nerdy scholarly musings. You can decide which is scarier.

A couple of months ago, another member of my Costuming Guild   posted a friendly suggested link on cosplay cleavage, with the note that it might be of use to the ladies of the group who were wanting to cosplay superheroes.

Now, like a good feminist, gender-scholar mother, I got all hot and bothered and posted a passive-agressively snide comment in reply-  hoping to see a tutorial on how to make men’s genitalia look bigger for cosplay.

And that’s when I learned something fascinating.  Guys cosplaying superheroes actually have the OPPOSITE problem.

They have to minimize, reduce and hide all of their business.

The gentleman who runs the guild is a Batman cosplayer  who pointed out that this is the challenge for men.  I had no idea.

However, any amount of time investigating the subject in online tutorials and message boards reveals a significant amount of angst, anxiety and outright disgust about the visibility of men’s reproductive organs as part of a superhero cosplay.

For example, a favorite site of mine: www.cosplay.com.  Has a new thread in a discussion forum, titled “How to Hide Your Junk in Spandex.” in which the user posts:

“looking for advice on how to hide my “Junk” when wearing spiderman suit. Ive seen lots of pictures of guys in superhero spandex, and there is that crotch “thumb”. (and it looks ridiculous).”

Luckily for the cosplayer in question, the internet is also full of instructional descriptions, videos and pictoral representations on how to “tuck and tape.”

Isn’t it interesting that women are coached and expected to play up their private parts, and men have been trained to hide theirs? That men themselves see the VPL (visible penis line) as “ridiculous?”

Turns out that even in major films, there is a great deal of effort that goes into hiding superhero packages.  This article details how Superman was digitally altered in post-production, and the new Spiderman necessitated a “new ‘high tech’ designed costume. A source on the set stated, “One whole day was devoted to make sure there was nothing inappropriate showing in the crotch area of the suit.”

Maybe this is the answer? Men’s genitalia are “inappropriate” for public view, while women’s breasts are fair game for everyone to look at?

Gender scholars will say that the latter is old, and well-trod territory. That women’s bodies have been viewed (and are viewed as public property and since forever.  Through the multiplication of images of idealized female bodies in the media, women even learn to see themselves through the eyes of others.   (That’s  just one link, there’s a whole literature on this for anyone who is interested.)

This study at the University of Nebraska-Lincoln confirmed that men’s visual focus is mainly on the sexual body parts, whereas women generally focus on faces. Surprising…..not at all.

So men, and the media, enjoy looking at breasts. Women learn to conform by making theirs more visible. Ok.

But this isn’t helping me with the issue of hiding male penises.  Superheroes are by definition, powerful and strong- almost hyper-masculine in their violence and contribution to the phenomenon of progressive muscularity. 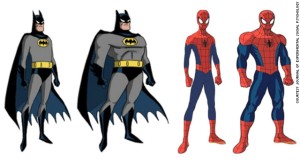 Social psychology researchers used these images in a study on men’s identification with superheroes. It’s also worthwhile to compare the image of Adam West as Batman with that of Christian Bale in the same role.

But if you search for advice on hiding male genitalia, two kinds of returns come up- superheroes and crossdressing (men dressing as women.)  Surely the penis is the most masculine of male body parts- since only men have them. Hence the desire to hide the part if dressing as a woman.  What’s the link, though, to superheroes?

Much of my thinking on this wonders if the disconnect is a product of specifically U.S., puritanical hang-ups about sex and our easy acceptance of violence.

We don’t seem to care how much violence we surround ourselves with in film (this study found that the amount of gun violence in films rated PG-13 has tripled since 1985), but we would prefer that our kids not even think about sex. (E.g. abstinence-only sex education)

But perhaps more on point is this study that found that in the period from 1950-2006, the roles of men and women in action films were increasingly polarized:

“women are typically portrayed in a sexualized manner. Despite the emergence of violent female action characters in more recent films (e.g., Lara Croft), violent portrayals in movies are overwhelmingly by male characters.”

As a Mom and a human, I don’t think I care for either of those messages- for girls or for boys growing up.

And in the world of superheroes, it makes one speculate about what each character’s “super-powers” really are.

One comment on “Problematic Genitalia: The Unknown World of Cosplay Superhero Naughty Parts”